There is a growing movement in the scientific community known as open science that aims to make scientific research fully transparent, reproducible, collaborative, and accessible to all people at all levels of society.  But isn’t that already how science works?, you may ask. While the detailed answer depends on which field of research you focus on, for biomedical science the answer is mostly no. Although the principles of open science may seem intuitive and fundamental, the health sciences lag far behind other scientific disciplines in implementing them. This is not because the scientists don’t see the importance of open science, but rather because of many complex incentive structures that work against it. But in the light of the COVID-19 pandemic, the importance of open science is clearer than ever, and its feasibility is undeniable. As if by magic, scientists and governments have quickly overcome many of the usual barriers to open science, forcing incentives to align with social benefit, and demonstrating that not only is it possible, but also necessary to do so when faced with a global health crisis of this magnitude. Science is the clear protagonist of this chapter of history, and its openness is essential.

Although previous pandemics have also inspired unprecedented international collaboration, never before have this many researchers across the globe worked together towards one common goal with as many resources and information-sharing technologies at their disposal. Compared with other epidemics that have occurred in our lifetimes, it is much harder to psychologically distance ourselves from this virus – it feels as though it is everywhere, affecting everyone, including the people we know and love. As a result of this reality, scientific processes that normally take months have been completed in days.

Since the standard implementation of the peer-review model – the process by which scientific results are vetted by academic peers – science has been largely ruled by credit and prestige acquired almost exclusively by publishing research results in so-called “high-impact” scientific journals. Scientists need publications to get grants and tenure, but traditional academic publications take months to go through journal submission, review, and formatting. Right now, we simply don’t have that kind of time.

Because of the obvious urgency of coronavirus research, the traditional publishing model is being side-stepped in favor of alternative methods to rapidly disseminate results and data. As of March 16, over 24,000 research papers on the novel coronavirus were made available through the Covid-19 Open Research Dataset (CORD-19). This includes publications from peer-reviewed journals as well as those from preprint servers like bioRxiv and MedRxiv. These archives allow researchers to store and distribute manuscripts that have not gone through the customary publication process, making them immediately available to the scientific community.

The shift to the use of preprint servers means that researchers in the fight against COVID-19 are now leaning on scientific findings that haven’t been through the traditional peer-review process. Although this could be seen as potentially dangerous because it may lead to the dissemination of erroneous contributions, the purpose of preprint servers is not to bypass quality assurance of scientific publications, but rather to speed up the timeline by allowing immediate access to results while inviting feedback from anyone (often via non-traditional formats such as twitter and forum discussions, blog posts etc.) rather than a select set of 2-3 reviewers. In recognition of the importance of peer-review, initiatives like Outbreak Science exist to facilitate rapid review of preprints in exactly this type of context. In its ideal form, preprint publishing allows information to be shared immediately and peer-review to be conducted with much more transparency and accountability than the traditional peer-review model, which has often been criticized as being prone to bias and inconsistencies.

Perhaps the biggest advantage to this open model of scientific publishing is that it is free and accessible to everyone. The most prestigious traditional scientific journals are owned by staggeringly profitable publishing companies who charge extortionate amounts of money both to the researchers who provide their content and to anyone who wants to access it. Unlike in other types of publishing, the authors of scientific publications do not collect royalties from their papers and instead pay the publishers to host their content and lose their right to distribute it. Academic institutions who can afford it then pay exorbitant subscription fees to the publishing companies, and without an affiliation to such an institution, access to top-tier research is a pipe dream. Many of those same companies are now making COVID-19 related publications temporarily openly available – some because of pressure to do so and some in recognition of the fact that open access to research is of public interest. Paywalls are a barrier to science, especially during a global crisis that affects everyone, regardless of their academic affiliation or financial status.

Hand in hand with open publishing is the open sharing of data. Although it comes with its own set of complex issues including ethical considerations and privacy concerns, one of the biggest barriers to open data sharing arises from the importance of claiming and receiving credit in academia. As a result of the lengthy timeline of traditional academic publishing, scientists are often understandably protective of their ideas, results, and the data they are based on. Even data collected with the intent to be shared is often embargoed for months or even years to ensure that the researchers who acquired it have time to collect their prize for doing so, because they need it to progress in their own careers.

The last few weeks have proven that even this deeply embedded and personal barrier can be quickly overcome in the shadow of the biggest public health threat of our lifetime. The rapid sharing of data of all kinds, from molecular structures and genetic sequences to predictive models of disease spread, has been accepted as essential and has proven imperative in the battle to contain the virus and curb its effects.

On January 10th, 2020, Chinese researchers sequenced and released the first genome of the novel coronavirus, a mere ten days after China first alerted the World Health Organization of an unusual outbreak of pneumonia in Wuhan. At the time, the spread of the virus was still relatively local, but the researchers recognized that this would prove to be an essential step towards fighting the outbreak if and when it reached pandemic levels.

63 days passed between the release of the genome sequence (a necessary step in vaccine development) and the announcement of the first human trial of a potential vaccine – news that was both impressive (record-breaking, even) and provided a glimmer of hope in a time of overwhelming uncertainty. Nevertheless, developing and approving a vaccine takes a long time regardless of whether or not we have time to spare.

Several strategies for vaccine development are currently being employed by different researchers around the world, from using mRNA from the virus itself to genetically modifying the measles vaccine so that existing production facilities would be able to pivot to manufacture a SARS-CoV-2 vaccine more quickly. Each of these approaches look promising, but they all take time – at least 12 to 18 months to develop, and then even longer to produce and deploy. Once a potential vaccine is identified, it has to go through clinical trials, the results of which must then be published, after which production and deployment can begin. The only way to speed up this process is if scientists continue to work together, openly, rapidly, and without regard for the usual speed bumps and negative incentives that may stand in their way.

One such negative incentive is the outsized influence of pharmaceutical companies whose primary objective is to make money. Drug discovery in particular is a field that suffers an imbalance between proprietary and open science, and although the rapid progress towards coronavirus vaccine development so far is shattering the status quo on drug development, corporate greed and nationalism still pose a very real threat to public health and open science. We need help from Big Pharma to win the fight against the pandemic, but they too must align their incentives with the public good.

The news that Donald Trump attempted, in true “America First” fashion, to buy the exclusive rights for the United States to a potential vaccine from a German biotech company is a perfect example of this threat. Thankfully, both the company and the German government responded with a resounding no, but that the offer was ever even on the table is both frightening and reflective of the fact that open science may not (and often will not) be the option favored at the highest levels. If  this (or any) vaccine were to fall into the hands of a single pharmaceutical company, that company could make millions while many of the taxpayers who helped fund the development of the vaccine would be unable to afford it. Similarly, allowing a single country to monopolize any potential vaccine or treatment to protect only its own citizens would be counterproductive when we are facing what is very clearly a global crisis. Open science in its broadest definition must prevail.

The sudden wide-scale adoption of open science practices extends beyond the front line fight against the virus to the home offices of quarantined people across the globe. Thousands of makers, scientists, and engineers are finding creative ways to assist the healthcare system by producing DIY solutions to much-needed equipment like 3D printing ventilator valves and face shields for healthcare workers. Scientists whose own research has been deemed non-essential and are therefore currently unable to work in their labs, are figuring out how to put their skills to good use through crowd-sourcing projects aiming to assist those whose research is directly related to COVID-19. Some funding agencies and research networks are setting up special grant competitions to fit the immediate needs of researchers wishing to contribute to the fight against the virus. While the long-term outcomes of these initiatives remain to be seen, their swift emergence feels promising and inspiring and provides a glimpse of how open science can help us win this battle.

Perhaps only through experiencing life in a context that feels hopelessly closed can we truly appreciate what it means to be open. When this whole mess is finally over, maybe we will have gained a better understanding of how science can and should be conducted. The real challenge, though, lies not in recognizing the value of open science (very few people who understand open science object to it), but rather in avoiding slipping back into our old habit of rewarding prestige and academic credit-claiming over sharing, collaboration, and transparency. The fact that open science is in everyone’s interests is clearer than ever in the light of this unprecedented crisis, but it will remain true once the crisis is over and life returns to normal. At that point, we will need to capitalize on the many examples of open science having truly accelerated knowledge and discovery during the pandemic to make permanent changes to our misaligned incentive structures. COVID-19 presents us with a real opportunity to do just that, so let’s not allow this silver lining to go to waste. 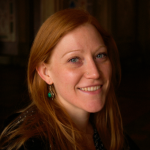 Estrid Jakobsen is the Communications Officer at QBIN and editor of the QBIN blog. She holds a PhD in neuroscience and is passionate about writing and helping students develop their science communication skills!