Aging is often associated with memory loss for personal events and their rich contextual detail (known as episodic memory). Episodic memory is the type of memory that allows you to remember where you parked your car in a mall parking lot, or whether or not you took your medication earlier in the day. It is also intricately involved with your personal identity, enables you to learn from past experiences, and helps you plan for your future.

Moreover, an interesting and unsolved question is whether men and women differ in their typical neurocognitive patterns of age-related memory decline. This is an important question to ask because understanding the similarities and differences in the effect of sex on age-related memory decline can be critical in providing important insight as to why there are sex differences in the prevalence of specific age-related neurodegenerative disorders that negatively impact episodic memory. For example, the lifetime risk of late-onset Alzheimer’s disease (AD) is twice as high in women as in men.

Indeed, there is evidence that early declines in episodic memory and corresponding dysfunction in specific brain networks, i.e. the midline default mode network, medial temporal networks and fronto-parietal networks, arise much earlier than the clinical diagnosis of AD. This tells us that otherwise healthy adults may experience problems with the neural systems supporting episodic memory long before they show any other symptoms of AD.

The majority of studies that have investigated memory loss in healthy aging have not looked at men and women separately, assuming that the neural correlates of age-related episodic memory decline are similar in men and women. Investigating how age affects the way women and men remember episodic memories can advance our current understanding of how the brain ages, and be used as a tool for monitoring healthy and unhealthy aging (such as in Alzheimer’s Disease).

As part of my PhD research, my colleagues and I investigated sex differences in episodic memory and brain function in a sample of 82 participants (50% females) across the adult lifespan. Participants were shown a series of faces (encoding) and then later asked to recall if a face was shown either on the left or right side in the original sequence (retrieval). We also wanted to know which parts of the brain were activated during the task, so we recorded the participants brain activity using blood oxygen level dependent (BOLD) functional magnetic resonance imaging (fMRI), which allows us to indirectly measures brain activity across the whole brain. While in the scanner, the participants’ brain activity is recorded while they are completing the memory task.

Our results showed that men and women performed equally well across all ages (there were no sex differences in memory performance), but the neuroimaging findings painted a more detailed picture of how men and women performed the memory task. Specifically, during encoding of the faces, the fMRI results showed that men and women showed similar patterns of brain activation. However, they used different parts of their brains when remembering. Women engaged frontal parietal and medial temporal systems to learn and remember faces successfully. Men also engaged frontal parietal and medial temporal systems when learning faces but showed additional activation in brain regions important for semantic processing (i.e., processing of facts, concepts, and their meaning) during remembering. These differences in remembering suggest that men and women used different retrieval strategies at the functional level (i.e., brain activity) to successfully remember the face-location associations that they learned during encoding.

Our results also showed, perhaps unsurprisingly, that younger adults were better at remembering personal events than older adults. Interestingly though, we observed sex differences in how age affected memory-related brain function. Older women showed deficits in right frontal and midline cortical areas, brain regions which have been previously associated with dysfunction in early AD. However, older women were also able to compensate by successfully recruiting frontal-parietal areas at encoding to assist their memory performance.

Furthermore, while recruitment of semantic processing brain areas was important for successful memory performance in younger men, we found that older men were not able to successfully recruit these areas to support their memory.

These findings imply that although men and women are equally good (or bad…) at remembering personal events, the way in which their brains do it may be quite different! Continuing to study these topics is important because it has implications for the way we treat the aging brain in men and women. This is a critical step to take in order to develop precision health care for age-related diseases, such as Alzheimer’s disease, in women and men.

To learn more about this study: https://www.mitpressjournals.org/doi/abs/10.1162/jocn_a_01455?af=R#.XVLstWkFLqQ.twitter 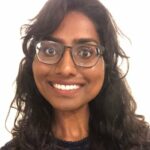 Sivaniya Subramaniapillai completed her PhD in Experimental Psychology at McGill University in 2021. Her research aims to characterize brain-aging trajectories of women and men and understanding the lifestyle factors that contribute to healthy aging. Sivaniya is excited about fostering scientific dialogue between the research community and the public in a way that promotes greater inclusivity and public engagement. To sign up to her personal newsletter, please visit http://sivaniya.beehiiv.com/.